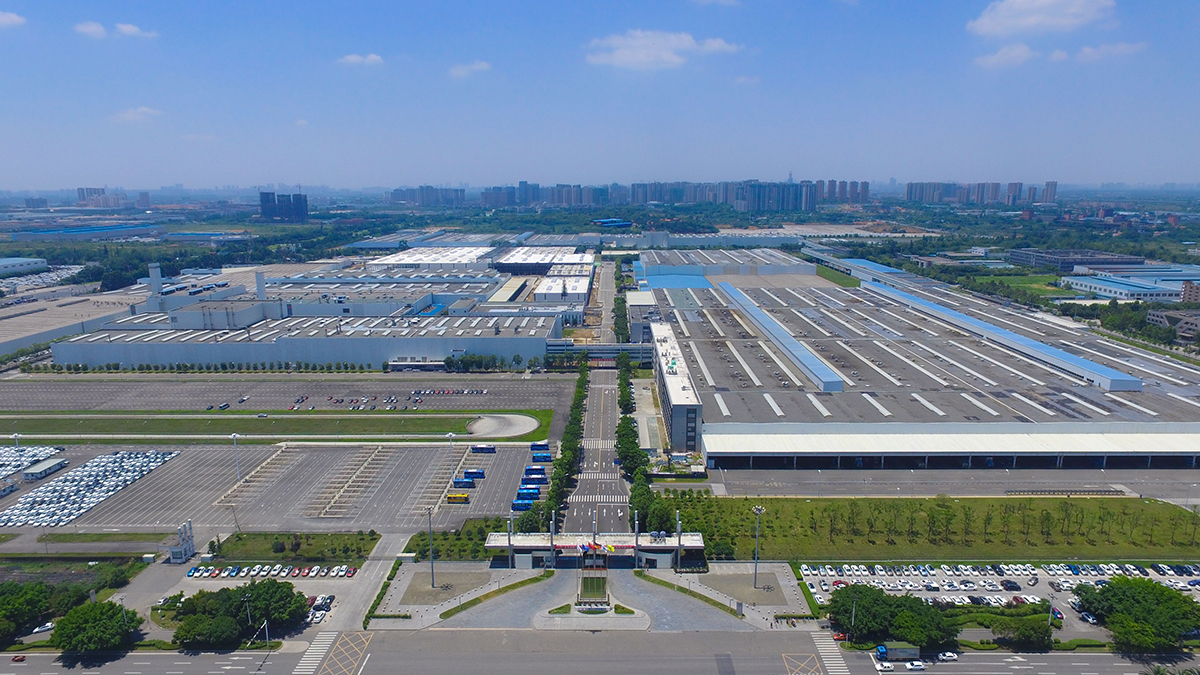 According to Volkswagen's best standard and most rational principle of plant construction, the company developed four leading processes: press shop, body shop, painting and assembly, and went into operation on October 13, 2011.The factory adopts a large number of energy-saving and environmentally friendly technologies and processes with domestic and international leading advantages. With low cost, low energy consumption, high precision and high efficiency, Chengdu Branch has become an outstanding model and "green factory" in the Chinese automotive industry.

The main products of Chengdu Branch are series models of Jetta Brand and VW New Sagitar. Up to now, Chengdu Branch has produced more than 4.9 million vehicles, with a cumulative output value of more than 400 billion yuan, and a tax of more than 44 billion yuan. With its huge driving effect of vehicle manufacturing, it has made outstanding contributions to the development of Sichuan's automobile and parts industry.

The good development trend of Chengdu Branch has been highly recognized by FAW Group, Volkswagen Konzern and FAW-Volkswagen. In September 2016, the company's board of directors approved the establishment of Jetta Brand and settled it in Chengdu Branch. The evergreen Jetta has been upgraded from a car model to a brand.

In February 2019, Jetta Brand was launched globally in Wolfsburg, Germany. In March 2019, Jetta Brand was released to the whole country in Chengdu Branch and officially came into market in September 2019. Since its launch, the sales of Jetta's VS7\VS5\VA3 models have exceeded 200,000 units. The young Jetta Brand has lived up to expectations and performed miracles with its outstanding market performance. 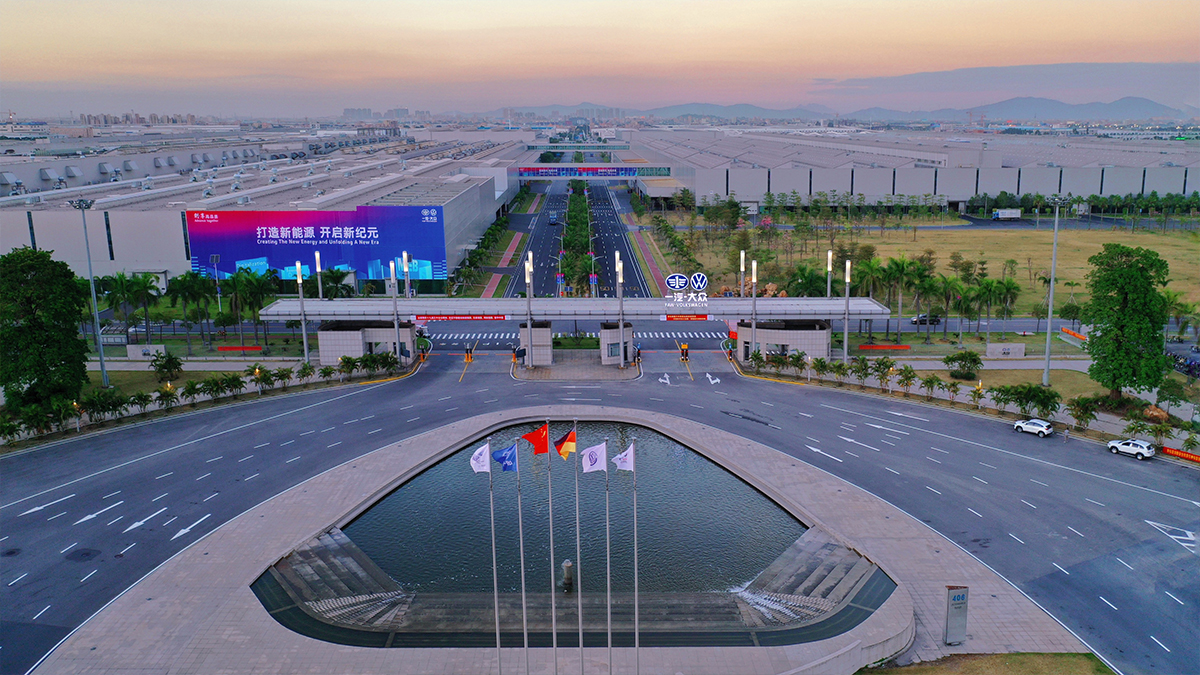 Founded on December 1, 2011, FAW-VW Foshan branch is FAW-VW's vehicle manufacturing base in South China. It is an important part of FAW Group's development strategy in South China. Together with Changchun and Chengdu, it forms an "iron triangle" covering almost the most developed regions in China. The straight-line distances to Changchun and Chengdu reach 2540km and 1200km respectively. The company is located in Shishan town, Nanhai District, Foshan City, Guangdong Province, with convenient transportation. The driving distance from Guangzhou Baiyun Airport is 63km.

The company covers an area of 1.663 million square meters and is divided into phase I and phase II projects. The total investment of the first phase project is about 13 billion yuan, covering an area of 1.039 million square meters, with a planned construction area of 455000 square meters. With reference to Konzern standard factory, the company has built four technologically leading production workshops of stamping, welding, painting and final assembly. The first phase project was completed and put into operation in September 2013, and the second phase project, with a total investment of about 15.3 billion yuan, was officially completed and put into operation in 2018, with an annual production capacity of 600000 vehicles. The company is a smart factory and model factory of FAW Volkswagen based on the electric vehicle strategic MEB platform. Its leading products are the first pure electric SUV id.4 crozz of FAW Volkswagen brand MEB platform, FAW Volkswagen's first Volkswagen brand SUV T-roc, the eighth generation of new digital golf, FAW Volkswagen Audi compact SUV Audi q2l and Audi q2l electric vehicles.

The overall planning of the project adopts the lean concept, aims at building an environment-friendly enterprise, and adopts a large number of international top-level production equipment, so as to realize the coexistence of efficient production and sustainable development. At the same time, adhering to the concept of "green factory, perfect factory", the company realizes zero discharge of domestic sewage and industrial wastewater in environmental protection, uses solar energy for some recycled street lamps, uses water-based paint for painting, cancels intermediate coating, uses varnish exhaust gas combustion, and uses sandwich panels with better temperature insulation performance for external wall panels of the plant. The company attaches great importance to environmental protection and green development, and is committed to the strategic goal of "goto zero" and "zero emission". By building a new nev ecosystem, the company aims to create zero emission travel for all. Through the construction of photovoltaic power generation project, the annual photovoltaic power generation capacity of the whole plant can exceed 30 million kwh after completion, which can save more than 7 million yuan for the branch company every year, reduce about 29000 tons of carbon dioxide emissions every year, and pursue the symbiosis and win-win of enterprise, society and environment. In the aspect of perfect factory, all inspection points should be centralized, communication distance and problem solving time should be shortened, quality assurance related functions (MB, cubing, audit, etc.) should be centralized in the technical center, management office should be centralized in the control center, and employee flow, logistics and vehicle flow should be separated and not intersected. The company has been at the forefront of the industry in terms of process level, production capacity, energy conservation and environmental protection, making FAW Volkswagen an advanced model in China's automobile industry once again.

As the base of FAW-VW Southern strategic new technology and high-quality modern car, the company will actively establish stable cooperative relationship with local government, supplier partners and dealer partners based on Guangdong-Hong Kong-Macao Greater Bay Area, GBA, so as to achieve the best customer satisfaction and continuously enhance the image of enterprise and brand. At the same time, the company continues to provide a large number of high-quality jobs, driving the concentration, intensive and cluster development of a complete automobile industry chain in the region, injecting new vitality into Guangdong Province, and laying a more solid foundation for FAW Volkswagen's southern strategy. 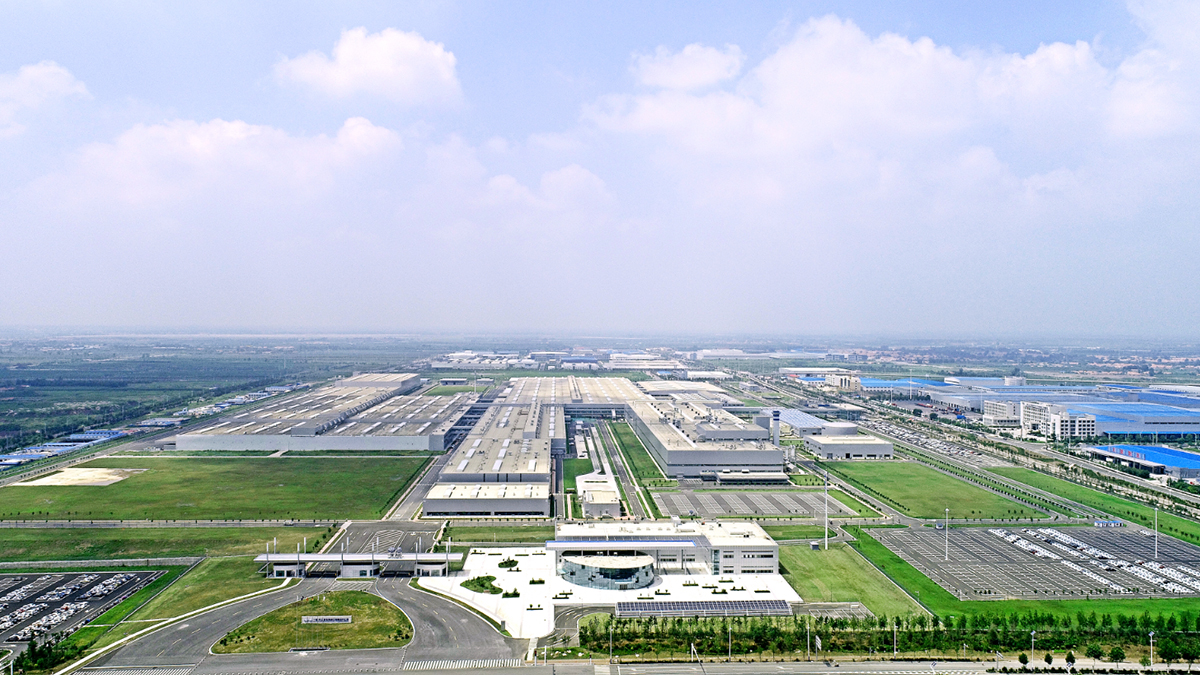 FAW-VW Automotive Co. Ltd Qingdao Branch (Qingdao Branch for short) is located in Qingdao automobile industrial park, Jimo, Qingdao City, Shandong Province. The plant is on G204. On its north, it’s Hua Quan Yi Lu. Ao Shan and Nv Dao, two national open docks, are near here. It is 27 km away from Qingdao National Airport and it is a significant production base in East China for FAW-VW Automotive Co. Ltd (FAW-VW for short). The established Qingdao Branch will carry forward FAW-VW’s industrial cluster effect and economic contribution, perfect the development plan of FAW-VW’s nationwide strategic layout and provide a great opportunity for FAW-VW to develop in East China.

The program of FAW-VW East China Base signed the contract on 7th July, 2014, laid the foundation on 3rd November, broke ground in July, 2015. The construction land is about 1.1 million square meters. The overall floorage is 473 thousand square meters. The expected annual output is 300 thousand automobiles. The pilot production began in August, 2017 and SOP is in March, 2018.

The construction of Qingdao Branch adopted China3StarsGreenBuildingEvaluationStandard and was the first factory among domestic industry to get “Certificate of Green Building Design Label” and “Certificate of Green Building Label” at the same time. Qingdao Branch adopts the advanced construction concept of worldwide standardized plants of German VW and meets the production requirements of Volkswagen Group MQB platform. The scientific and reasonable plant layout not only got the advantages of industrial mass production but also fulfilled the idea of Lean Production and Quality First. Meanwhile, the plant adopted advanced manufacturing technology. The automaticity, environmental protection measures, the energy consumption per 10,000 yuan and the overall manufacturing technology are all in the lead at home and first level abroad.

As a significant step in the nationwide layout for FAW-VW, Qingdao Branch will strive to make great contributions to FAW-VW “Advance Together 2025” and the sustainable development of the company. The total investment of Tianjin branch is about 19.49 billion yuan. It innovates and upgrades in production, quality assurance and management, creating a new dimension of domestic vehicle production system. The Press shop optimizes the production rhythm, has two automatic stamping production lines and a high-speed uncoiling line, and the whole line has aluminum production capacity; the body shop adopts MQB-A2 platform to build a three model flexible production line, which is in the leading position in the body shop of domestic vehicle manufacturers; as the first workshop of FAW Volkswagen to use VOC free cleaning agent, the Paint shop is the first workshop of FAW Volkswagen The reduction of VOC emission has made an important contribution. The paint robot in the workshop makes the automation rate of the topcoat line reach 100%. At the same time, JIT management mode is adopted in the production line of the general assembly shop to improve the vehicle assembly quality.

The Tianjin plant uses the 5 P’s lean manufacturing model, which creates efficiency and maximizes profit through the five “P’s” – Purpose, Process, People, Platform and Performance. We categorized the project into five modules, which include plant, product/pre-serial, part/logistics, processes and people, as well as 61 sub-modules, while at the same time formulating detailed schedules for each module and tracking them accordingly. The digital operation visual system is managed by the central control room, and the local control is realized by the visual computer.

Based on the present, layout the future. On the one hand, the factory reserves the production capacity of PHEV / Bev; on the other hand, the painting and assembly shops reserve the maximum passing size (length and width) conditions for the production of class B vehicles; on the structure and land use, the main engine plant reserves 1.03million square meters of development land to meet the demand of future capacity expansion. In addition, FAW Volkswagen Tianjin Branch adheres to sustainable development and has obtained the green building design "Three start" certification.

As the final work of the strategic layout of FAW-VW's five bases, Tianjin Branch learn widely from others ' strong points and has been highly valued by both Chinese and German shareholders. In addition, the project has been strongly supported by the Tianjin municipal government and all walks of life since its launch. In only 23 months, the project team has rapidly promoted the project in the spirit of sincere unity, hard work and rigorous pragmatism, built the future of the industry, created fruitful results of "FAW Volkswagen speed", and directly promoted the employment of nearly 6000 people. It is estimated that the supply of spare parts will increase Its total output value can reach 30 billion to 40 billion yuan, which has become a new growth point of local economy. At the same time, it has made an important contribution to the smooth completion of FAW Volkswagen "2025 strategy" and the sustainable development of the enterprise.